The National Transfer Accounts project is spearheaded by Ronald Lee and Andrew Mason. It has compiled data on income and consumption by age, as well as demographic data, for an array of countries. Note that the focus below is on labor income, and is age-specific rather than aggregate [since different ages have different populations]. You can download their data in excel.

Above I’m also putting several of the Japanese population pyramids drawn from their National Institute of Population and Social Security Research. Below is the simple framework we developed in class. Note that in a developing country, or any time in human history before 1900, child mortality was high. So this is the framework for thinking about the target number of surviving children a family (or mother) would desire. With 50% mortality, a woman would have to aim for 4 children to have a 50% chance of one boy surviving. Having 6-8 children would thus not be unusual. Oh, and it’s not as though women haven’t been able to control fertility until the advent of modern contraceptives. In case you lack imagination, you can even written guides for past centuries from many societies.

We need to pull this back into the US context; more on that on Thursday. Note the very different profiles of Mexico and the US at older ages. Note the gap between labor income and consumption. Think about the age profile of the US [I did NOT put up a graph on that – a blog post topic for one of you. Because fertility is very close to 2.0 over a woman’s child-bearing years, our profile is NOT like that of Japan! 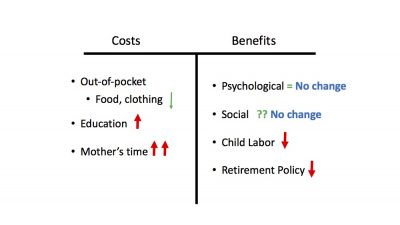