We looked at a paper Hoshi & ItoNote that argues Japan’s budget deficits are not sustainable, indeed that without adjustment bond issues will exceed total domestic financial assets in the mid- to late-2010s. Since bonds ARE a domestic asset, something will have to give. Their focus isn’t on what that means, but in effect the economy is situated between [perhaps temporarily] disabling pain and disaster.

What of the US? That follows an overview of their framework, which is standard.

The core item (using lower case to indicate per GDP, eg bonds B/y = b) is their equation (1), though here I use gamma γ as more natural for GDP growth.

We can then add the surplus (deficit) term (g-t). Again, that is in per GDP terms.

Now they define sustainability relative to private domestic financial assets “a”. A starting point though is to ask what level g-t [g=expenditures, t=taxes as shares of GDP] needs to be to stabilize b at a constant level. If

What seem reasonable levels for “r” and “γ” in the US context? What is “b”?

What is “net debt”? Does it matter? [Hoshi & Ito think not: if the Bank of Japan buys JGBs (J govt bonds) then they pay for that in “money” that the govt then uses to pay its bills, and that money constitutes a domestic financial asset. They show that on its current trajectory the amount of Japanese government bonds will exceed the amount of domestic financial assets in the mid-2010s.]

Finally, Japan is not a federal system; local, prefectural and national are more-or-less one big pot of debt. How about the US?

Now it would be many hours of work (3-4 hours, once data are in hand?) to do a simplified simulation for the US along the lines of what they have done. We can however do crude back-of-the-envelope calculations. When I did that for Japan many years ago I got more-or-less the same answer, but at that point debt levels were much lower so the fiscal adjustment required was smaller. So I think we’ll learn a lot from doing simple calculations for the US.

Part 1: My first attempt to calculate r-γ, done in class, used nominal GDP and nominal interest rates. However, periodic inflation-fighting monetary policy meant that “r” varied by large amounts, and did not produce any useable information. However, if we compare real GDP growth with real interest rates (the latter drawing upon TIPS to get inflation-adjusted long-term rates), we do get fairly consistent results: r-γ ≈ -0.5. That lowers the burden of our debt, but because deficits are far higher than 0.5% of GDP our fiscal situation is nevertheless unsustainable. But that leads to a second question: is it really reasonable to think that interest rates consistently lie below growth rates? After all, that means that buying a “GDP portfolio” beats buying bonds. 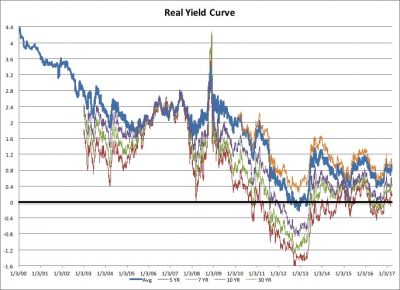 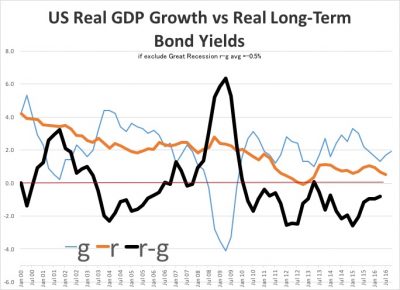 Part 2: Order of magnitude Federal debt is approximately 100% of GDP. Hence (conveniently for the arithmetic) b ≈ 1. With r-g ≈ -0.5 we can run a deficit of 0.5% of GDP forever. Unfortunately, our current deficit is about 3% of GDP. Now that’s a vast improvement over the -10% of GDP level at the trough of the Great Recession. Subsequently employment growth and profit growth and a drop in unemployment-related expenditures led to a 7% of GDP improvement. We can’t expect further gains, that is, there’s little upside potential. If we average across any future “downs” then we should view a likely average across time as at best -3.5% of GDP. So Congress needs to “enhance net revenue” by 3% of GDP. Unfortunately the current Republic Party talks about balancing budgets but in practice cuts taxes and not expenditures.

In sum, our current Federal fiscal stance is not sustainable.

Addenda: US-heavy portfolio strategies are great for the sustainability issue, bad for the US dollar. And is it good for management to be able to reap bonuses from achieving high stock prices without actually having to generate higher profits? 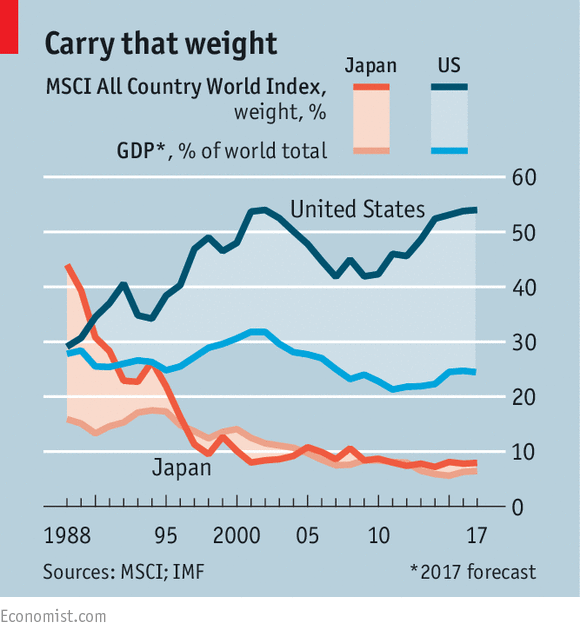