One of the things that intrigued me in class this week was thinking about the spending habits of those in retirement age. During a person’s lifetime, they’re theoretically preparing for retirement and planning their financial future. With the Baby Boomer generation starting to leave the workforce, it’s important to know their spending habits in order to predict how the economy will change as we depend on their consumption habits for economic growth in lieu of their work. According to TIME, the majority of retiree’s spending goes to their homes since they overwhelmingly choose to maintain their mortgage as opposed to paying it off.

The Bureau of Labor Statistics put together a helpful profile of spending patterns for older Americans and looked at the changes from previous surveys. In 2014 older households (55 or older) made up 41.5% of the Consumer Expenditure Survey with an average household income of $58,528 for the group as a whole. Average income was higher for 55-64 which would make sense since they’re still working instead of relying on their retirement savings like hose in the above 75 group. Housing continued to be the largest expenditure overshadowing the second largest, Transportation (33% compared to 17%).

While these figures may not seem very shocking, it paints a grim picture for the future since retirees are not remaining productive members of society. Even as they spend, their habits are skewed towards things like housing which do not have any grand returns to the economy. As retirees become a larger group in society, those who are working-age will have to make up for lost economic growth and decreases in consumption. 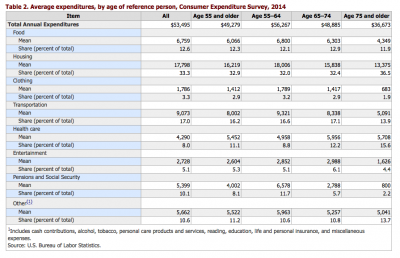