Courtesy of the graphs to Prof. Smitka who made them in excel using data from CoreLogic – thank you (Apologies if they’re blurry – I couldn’t make them any better than this as they are pictures)

The data for mortgage performance can be found at  http://www.corelogic.com/ for anyone who wants the specifics of numbers. You have to sign up with your e-mail in order to download the documents, but they’re a data/consulting company so they don’t send you annoying emails every day.

The recession in 2008 reminds us of why mortgage performance is an important indicator of the economy. During the recession, a lot of subprime loans were being pushed on people who had bad or nonexistent credit. These borrowers did not have income, yet they were still being pressured to get what are sometimes referred to as “liar loans.”  This was working as long as house prices were going up because people would take out new mortgage to replace old mortgage. So, for example, in the 1990’s house prices were pretty stable, so this was not disastrous. While there were slight increases and peaks, 2008 was when it really took a hit and home prices dropped and plummeted. This meant that someone who bought a house at the prime time could have had his/her home worth 40% less than the value they thought. As a result, people stopped paying their mortgages because it did not make sense to. The reasoning was that you can’t sell off the house and be able to pay the loan off, so it was a better option to just let the banks repossess your house instead of paying the mortgage.

Though I do not have data from earlier than 2008, it is important background to keep in mind when looking at mortgage performance.  The data that is being presented here is from 2010 onward on a quarterly basis (Q1, Q2, Q3, Q4). On the graph “Mortgage Equity,” net homeowner equity has been steadily rising since 2010 (the red line), indicating a more positive trend. Basically, it signifies the value of ownership of the house that represents the current market value (without any remaining mortgage payments). Mortgage debt outstanding (the green line) has stayed relatively constant, though there has been a slight increase since 2013-Q2. In the second graph, “Corelogic Loan-to-Value ratios,” we can see that all values have been steadily decreasing since 2010 as well. These all seem to be good signs.

Overall, mortgages are performing much better today than they did 9 years ago when the recession hit, which is expected. I wonder about the state of home prices as well, and whether this would look different if we were looking at a regional basis (e.g. would we expect mortgage performance to be different in california vs. oklahoma (i’m assuming so), and if so, what kind of difference and how much?) Looking forward to those posts soon. 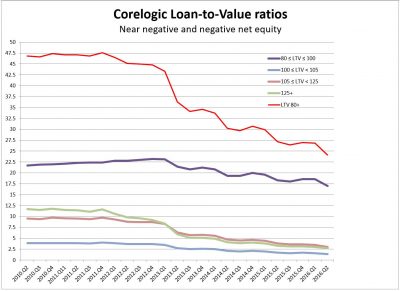 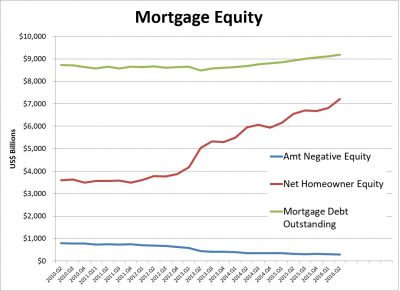